This show was very random, but I 'm not sure if I can describe its randomness very well. We'll see.

After we set up, and before we went on, a woman yelled a request to us. Her friend came over and said, "My obnoxious friend wants you to play Just Like Tom Thumb's Blues." Chris said, "Sure, we'll do that first." "Oh, that's a real song?" she replied, surprised.

But Chris realized that he had left his harmonica rack in the car, so did the first song solo -- I ended up picking 'Leaving Home', which is a sort of a take on the 'Frankie and Albert'/''Frankie and Johnny' story. Then we did 'Just Like Tom Thumb's Blues'. Then we actually did a couple of songs from the set list, 'That'll Never Happen No More' and 'Folsom Prison'; after that, the drunk woman asked us if we could do 'From a Buick 6' (another Dylan song, but one we don't know), then asked us if we knew any James Taylor songs (*cough*), then wanted us to do some more Johnny Cash. So I sang 'Sam Hall', which is a song from Johnny Cash's last album which involves telling the audience to go to hell a lot, which is kind of fun. Then we did '"Pumpkin, Mrs. Farnsworth"', which was a request from Kári. While I was singing that song, I glanced over at Chris's girlfriend and noticed that she looked completely mortified. Feeling a little guilty about this, I suggested that we next do 'Tear My Stillhouse Down', which I happen to know she likes a lot, so we did. Then ... I don't even know, except we did an abbreviated version of 'Cabbagehead', which is a song I don't think we've played in over a year, and ended with 'I Believe To My Soul', which drunk woman tried to sing along with.

The thing that struck me about that set is that someone who listened to it would probably not have described our band as a blues band. That's not really what would have come to mind.

The second set was relatively normal and we pretty much stuck to the set list, except that Chris had us do this thing that he sometimes like to do where you start with one song ('Liberty' by the Grateful Dead in this case), get partway through it, then segue to another song (Chris's own 'The Local Expatriate'), then segue back. It's a jam band kind of thing to do. (It's not something we typically try in the Killdevils, because two players doesn't really constitute a jam band.)

saucypunk and Kári came to the show (which is greatly appreciated -- thanks!) and

saucypunk asked me if I could play 'Avocados and Beer', since I wrote it for her and yet she had never heard it played live. At the beginning of the third set I was supposed to do three songs solo, so I played that song on piano for the first time ever (making possibly more mistakes even than when I played it live on accordion for the first time), then did 'Milk Cow Blues', and then I couldn't think of anything else to play so I did 'Watching Killer Robots Eat Your Head'. Then Chris came out and we did a bunch of rock & roll songs -- Naked Man, Down By The River, Johnny B. Goode -- and some uptempo blues songs -- Big Road Blues, Caldonia, and Bourgeois Blues. We did the fast songs really fast and it was all really energetic and fun. After Bourgeois Blues (or arguably during it) I was pretty wiped out, so we ended with a couple of slow songs, 'Sin City' and 'Waterbugs', which I felt like I was just the right level of exhausted to do really well -- that might have been the best performance of 'Waterbugs' I've ever done. (What makes a good performance of Waterbugs, you might ask? I think the main thing is to sing it with complete sincerity and resist the urge to speed up.)

It was a good show, although kind of a bewildering one. It is nice to have things shaken up from time to time. I think I will sleep well tonight.

cgoldfish and me for lunch today at 1 pm someplace?

Edit: Despite earlier edit, the location is still being decided.

One tactic that is used to influence people in a certain circle of my friends is giving them sad eyes. Here

cgoldfish is giving the sad eyes: 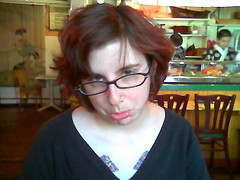 and here is me: 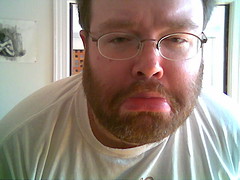 At a certain point I made a mental connection between the sad eyes and Li'l Brudder from Homestar Runner. Ever since then, when someone gives me the sad eyes, it is pretty difficult for me to not laugh. Which some might consider strange. Actually, some do consider strange. Anyway, this has led to occasional sad-eye-offs, where two people will give each other the sad eyes until the other breaks.

cgoldfish won one of these contests at lunch today.

I encourage other people to post sad eyes pictures.

That is all! For now.
Collapse