I decided to go to the Hi-Hat tonight to see the Superchief Trio. When I got there I noticed some signs in the window that I don't think were there the last time I was there. Here is one of them: 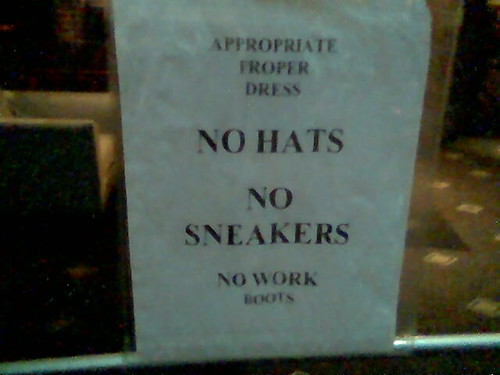 Another sign also forbade tee shirts. One of which I was wearing. However, as it happens, I actually have something which I thought should pass muster: the suit I got so I would have something to wear at last Saturday's wedding. 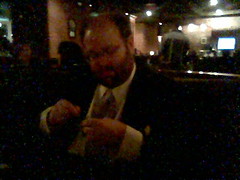 After a while, the waitress came around and put one of these oddly-worded notices on my table: 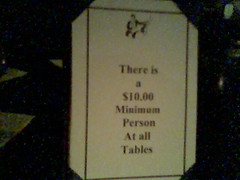 $10 turns out to be four smallish Diet Cokes (which is what I was drinking), but I was there with other people who had more expensive beverages so I only ended up drinking two.

The service was OK, which is a change from the last time when the servers ignored me for 45 minutes. I think this is probably because I was dressed up fancy this time, whereas last time I was wearing what I usually wear. (If wearing a tux is being dressed to the nines, I think normally I am dressed to the ones or maybe on a good day to the twos.)

The Superchief Trio were fun as always, though.
Collapse