On these little business trips I tend to descend into complete exhaustion after three days or so. That appears to have hit. Fortunately, tonight I go home! (Unless my flight is cancelled.)

vardissakheli's recommendation, I went to Silver Spring last night to check out the 48 Hour Film Project, which was quite fun! Many of the movies were surprisingly good.

I am going to call a customer shortly, which I am not entirely looking forward to, but I am sure it will be fine, really. Posting to my livejournal allows me to postpone this task a few more minutes.

I'm going to see if the bookstore at the airport has this book. (The one at Union Station didn't seem to.)

There is a carton of Berries & Cream Dr. Pepper in the employee lounge. I could get used to that. 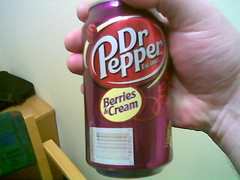 Tonight my flight back to Providence got cancelled. This is either the third or fourth time in a row this has happened. (For some reason flights to work never get cancelled, but flights home from work do quite frequently.)

I now feel like I am kind of a veteran in the area of dealing with having one's flight cancelled in the Baltimore/DC area, so here is my advice to those of you who find yourself in this situation.

If you have a cell phone, there are many things that can be done with it. You can call your airline and reschedule your flight, which is more pleasant than waiting at the counter for an hour to talk to someone who is insane from dealing with fifty other people just like you. You can also book a hotel for the night, which I would rate an even higher priority.

I learned a new trick tonight. When I learned that my flight was cancelled, I called a hotel and booked a room for the night. My impulse was to immediately go there and call the airline from the comfort of my room, but there was one problem: I had checked a bag and, ideally, I wanted to get it back for the night. I asked a friendly airport staff person what to do about that, and he told me to go down to the baggage area, which I did.

There I learned that I would have to stick around for another hour to get my luggage, which I decided I didn't really need -- but I also learned that they could change my booking for me there, also. So that was handy.

There is a certain purity in the experience of getting to a big airport with plenty of time to spare, staying at your gate, and watching your flight get delayed a couple of times and then cancelled. There is nothing much you can do about it, and there is nothing much the airport people can do it about it either, and all of you are all kind of screwed over together -- nobody is made happy by this sort of event. Really, there is nothing for it but to go softly sing Talking Heads songs to yourself as you wait for your public transportation to arrive and take you somewhere to sleep.

Some other oddities of the evening: while my flight was delayed (but before it was cancelled) I decided to make a phone post, so I called the LJ phone post number. There was an immediate answer, an automated voice said 'goodbye', and I was hung up on. Further calls had the same result.

Oh, well, so I called my home phone number to see if I'd gotten any voice mail this week. Again, an immediate answer and an automated message, but this time it said, "The number you have reached, [my phone number], has been temporarily disconnected." So I think i will need to call Cox Communications after I get home tomorrow to see what's up.

When I went up to my new hotel room, I walked in and immediately saw out of the corner of my eye a pair of women's shoes on the floor. 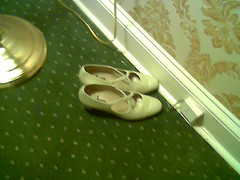 This freaked me out for some reason. I am now in a different room.

I guess what I'm saying is that in certain ways this trip could have gone better. It still, however, has been way better than my last trip. I suppose knocking on wood is in order.