I guess this is to be expected for a somewhat beat-up 1994 Toyota Corolla with over 120,000 miles on it. I want to get all of this stuff fixed soon.

I'm about 250 miles short of my next oil change. Also I think getting the door stuff fixed is probably best done at a dealership, and they will probably need to order parts so it will take a couple of days.

So maybe the plan is: try to get the AC fixed soon, since that can probably be done most anywhere and should be relatively quick. (With luck, I can get it done someplace near a place with wireless Internet, so I can drop it off, work from there until it's done, then go home.)

Then, once it's time for the oil change, go to the dealership, get a rental for the time until it's fixed, and take it from there.

(I am trying not to think of what getting the door-related stuff fixed will cost.)

Did you hear about the idiot who locked his family in his car?After my last post,

I fixed a cannot-open-from-inside door for a friend of mine once after he'd been putting up with it for months. He has no children. I do. Are there child locks on the rear doors (usually a little lever on the door near the latch mechanism, accessible only when the door is open)? Did one somehow get set?

(I should mention that someone had mentioned child locks in this connection before, but I thought they were talking about the button on the driver's door which, when depressed, prevents anyone in the car from rolling down the window or unlocking the door.) So I went down to have a look, and indeed not far from the latch was a little unlabeled black button which could be twisted between two positions (which were about 45 degrees apart).

I rotated it to the other position, but the basic problem then was: how to figure out if it made a difference or not. So I got in the back seat of the car, figuring that if I had just locked myself in I would just let myself out of the other door. I was in fact able to open the door again, so that seemed good.

In a pointless attempt to make sure that this had in fact fixed the problem, I then switched the button back to its original position and got back in the car. As predicted, I could no longer get out of that door.

So I went over to the other rear door and discovered that it was blocked by a cabinet which my landlord had left on the other side of my car. Images of me attracting the attention of a passerby and getting them to let me out of my car went through my head. It wasn't pretty.

Finally I decided to try wedging myself out of the passenger-side back door, which was uncomfortable but worked. Then I switched the button back to the unlocked position and continued on my way.

Incidentally, this is what the sign for the hair supplies place next door has had for the last couple of days. (I think it's their entry for a new menu item at Trinity Brewhouse, although I'm not sure what it would contain, other than the obvious.) 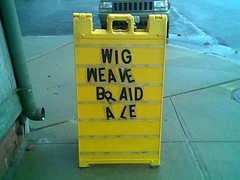 It took him all week to get them out.
Collapse