This was on the side of the East Side Service Station (now closed) this morning. 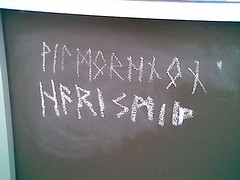 It seems to say:

The fifth character doesn't appear to be a real Runic character, so I'm guessing that it's either supposed to be an S or the letter jera.

mskala points out that this depends on the runic alphabet you're using.

Currently I am going blind at a window table in the Starbucks on Thayer Street, if anyone is in the area.

Working from Starbucks all day is kind of maddening.

Even if they did just give me a free tangerine smoothie in a dixie cup.

So last week I called the East Side Service Center and made an appointment to get the AC in my car recharged. The idea was: I would drop the car off in the morning, then walk the block and a half to Starbucks (or some other place with wireless Internet), work from there until my car was ready to go, then walk back, get the car, go home, and finish working.

When I showed up at the service center this morning, however, I learned that they were closed and that I would instead have to go to their other center on Hope Street, which was about two and a half miles away. Possibly there was an Internet access point nearby, but if so I didn't know where it was, so this was a horse of a different color.

So this ended up happening instead: drop off the car and get a lift to Thayer Street. Work until 5 pm, then get so sick of working at Starbucks I ask my coworkers if I can leave early. Walk down Blackstone Boulevard to the ice cream shop next to the service station, fortify myself with ice cream, then get the car, drive to Wickenden Street, walk up and down Wickenden putting up posters for Thursday's show, then go home and post to livejournal about the whole thing.

(I also had lunch at the Creperie, which was tasty, and

chaos_are_me was working there, which was also nice.)

So today involved a lot more walking than expected. Which is good, really. After practice tonight I think a certain amount of collapsing will be called for, though.

Tomorrow I will get a haircut.

(Oh, and the AC in my car works really well now.)
Collapse