Here, have some extremely blurry pictures of David Rawlings and Gillian Welch playing at Nick-a-Nees: 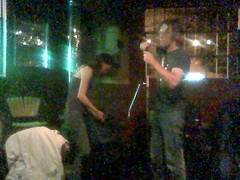 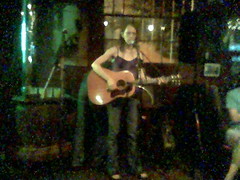 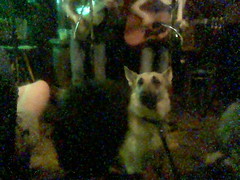 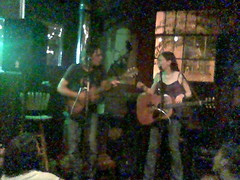 Monday night I heard a rumor that this would be happening. Tonight it actually did. The one thing that is probably clear from those pictures is that I was sitting about twenty feet away from them. They set up where all the bands set up at Nick-a-Nees, which is to say where Chris and I set up when we play there; I'm generally off to the right where Gillian is standing and Chris sets up on the left where Dave is. There was no cover charge, but the bouncer did pass the hat a couple of times over the course of the night for the band;.

Over the course of the night they said a few things that cleared things up a bit. David Rawlings got booked to play at the Newport Folk Festival this weekend; since usually he backs up Gillian (he usually does one or two solo songs per show, I think) he didn't really already have a set or two of material ready to go. So they came out a little early (Dave grew up in Rhode Island and still has family around) and, rather than staying home and practicing in a room by themselves, they decided to go do some unannounced shows around town. This was their second.

Their first show was at Cafe Zog. The way playing at Cafe Zog works is that musicians sign themselves up; there's no booking agent. So Dave went in one day, asked if he could play, and the guy behind the counter said, "Sure, is there a pencil by the calendar?" He signed himself up, but because nobody was really paying attention nobody knew about it, and when they played there ended up being about five people in the audience. That would have been something to go to!

But that wasn't the situation at Nick-a-Nees, which was totally packed; they stopped letting people in partway into the first set, and only let more people in after some of the first batch left. (This led to a bunch of people peering in through the windows you can see behind Gillian and Dave in the pictures, which was funny.) Fortunately, I got there early.

katrinkles and Greg turned up later, but happily were allowed in without too much delay.

I don't remember all the songs they did -- I didn't recognize a fair number of them -- but a few I did recognize were: The Big Rock Candy Mountain, Queen Jane Approximately, Elvis Presley Blues (sung by David Rawlings, not Gillian Welch as it is on the album). They did two sets and one encore: Revelator, which is a very beautiful song.

I was very happy for the entire night, but especially when they sang the Gram Parsons song Sin City. This is one of the first songs that Chris and I started playing together, and something about hearing them perform a song in the same spot where Chris and I have played it was just indescribable. (David Rawling's guitar solo in this song was particularly ridiculous.)

At 6 pm today I was afraid that I would have trouble staying awake for the whole show, but right now I think I will be awake for a while yet.
Collapse