Here are some blurry cameraphone pictures I took tonight of large hurdy-gurdies. Both hurdy-gurdies were made by Providence musician Steve Jobe, who also plays violin, viola, and regular-sized hurdy-gurdies.

The occasion tonight was an open rehearsal for a production that's planned for September of 2007, a collaboration with three dancers. As such, they're currently still working on nailing down exactly what they're going to do and how the production is going to work, and after they ran through a piece they would ask the audience if they had any questions, suggestions, or other feedback. It was pretty neat! I was there for about an hour, and would have stayed longer except that I had another social engagement I wanted to go to. (If I didn't have a show tomorrow I would try to go back then, just to see what changed between the two rehearsals.)

Steve Jobe is, as I understand it, the head musician for the production -- he designed and built conceived of most of the instruments (which, apart from the hurdy-gurdies, included some glass bells and a gong-drum, which is sort of like a bass drum whose heads have been replaced by gongs), and he wrote most of the music (although it sounds like some of it is improvised and other of it is emerging somewhat organically over the course of the rehearsals).

One of the hurdy-gurdies is, I believe, the first large hurdy-gurdy that Steve Jobe built. It's basically a drone; unlike other hurdy-gurdies there aren't the buttons that allow you to change the pitches of the strings while the instrument is being played. The body of the instrument is based on half of an oil barrel, and the frame reminded me of a cannon's enclosure or, to a lesser extent, a wheelbarrow. There's a basic hand-crank at one end, which drives a wooden wheel, which agitates the strings, which provides the notes. Here are a couple of pictures of it: 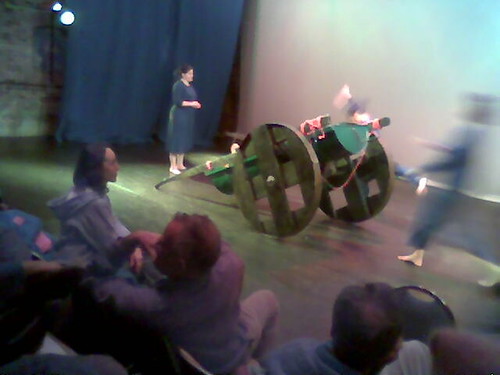 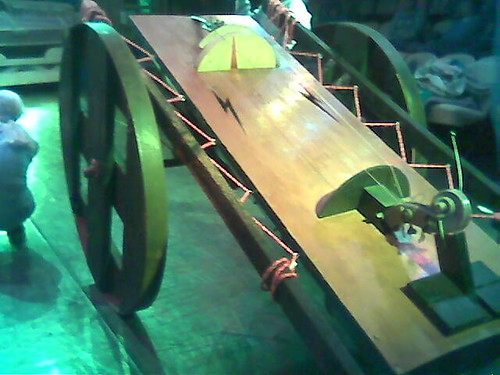 The cart's wheels occasionally squeak loudly as the instrument is wheeled around. The dancers drag it around and crawl over it during the show, and there was a discussion at one point as to how best to avoid getting maimed while they were doing this.

The other hurdy-gurdy is more complex, and unfortunately I didn't get to see it be played. While hurdy-gurdy #1 just has four bass strings and no way of changing the notes, hurdy-gurdy #2 has strings in three different registers and does have a bunch of buttons or stops which can be used to play notes in the top two registers (if I understand its working correctly). Each of the registers has its own hand-crank, so playing this instruments takes three people (one to man the bass crank, another to man the other two cranks, and a third to press the buttons). 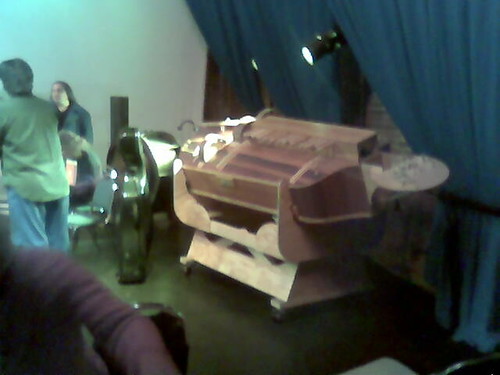 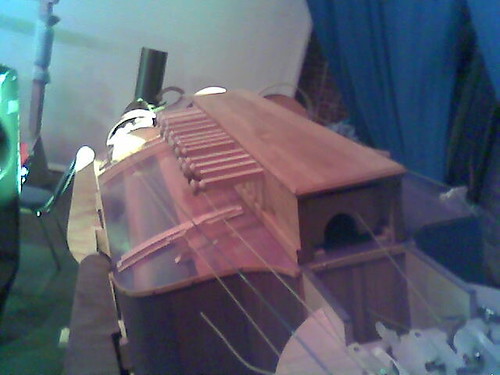 On Steve Jobe's website there are some links to videos showing hurdy-gurdy #2 being played. They take a really long time to load, unfortunately, but they are pretty cool. movie #1 movie #2 (I would probably watch the second video first).

The strangest thing to me in watching hurdy-gurdies (of any size) being played is that, because of the way they work, they tend to be at a pretty constant volume -- which means when someone plays one they tend to go along full bore until the end of the piece, when the music abruptly stops as soon as the crank stops being turned. With pretty much every other instrument there tends to be a bit of reverberation or quick diminuendo even after the player stops playing the instrument, but this doesn't seem to be the case with the hurdy-gurdy, and it takes a bit of getting used to.