My home Internet connection was up and down this morning, so I decamped to the mall. I am working from the Borders at Providence Place today.

Which I guess means I'll eat lunch here. But which of the mall's eateries should I go to? So many choices! There seems to be a list here: http://www.providenceplace.com/html/mallattractions.asp

I figured I would turn this into a poll so I could SHARE THE ENNUI!
Poll #888740

Open to: All, detailed results viewable to: All. Participants: 14

where should jake eat lunch?

Cafe Nordstrom -- I've eaten here a few times. It's one of those places where you take a plastic tray and carry it along past various stations where you can get different kinds of food and then you end up at the cash register where you order your food. They have sandwiches and salads and pizza and stuff.

Dave & Buster's -- D&B is kind of like what Chuck-E-Cheese would be if it were for adults, which is to say, kind of depressing. They incorporate a restaurant with standard american restaurant food: hamburgers, maybe a pasta dish or two, etc.

Fire + Ice -- this is a Mongolian barbecue, although they don't use those words.

Joe's American Bar & Grill -- I'm not sure I've ever been here, but it's a bar and grill, so I imagine it's like every other bar & grill in the world.

Napa Valley Grille -- I've never been here, so I dunno. I think it's kind of expensive, probably to help pay for the 'e' at the end of 'grille'.

The Cheesecake Factory -- I went to one of these in Chicago a while back for some cheesecake, not realizing it was a chain. Apparently they have other food too. Notable because a friend told me a story about how when someone from out of town asked where one should go for Italian food in Providence, one of her coworkers said, "The Cheesecake Factory!" and then, when it was pointed out that this isn't actually an Italian restaurant, said, "But they have everything!"

Uno Chicago Grill -- Remember when this chain was called 'Pizzaria Uno'? I guess that was too limiting.

crappy food court places -- including some generic chinese place, Spike's Junkyard Dogs, Johnny Rockets, I think some kind of generic Indian place, etc. (I know some of these aren't actually crappy restaurants, but they get to be called that anyway because they are, after all, in the food court.) 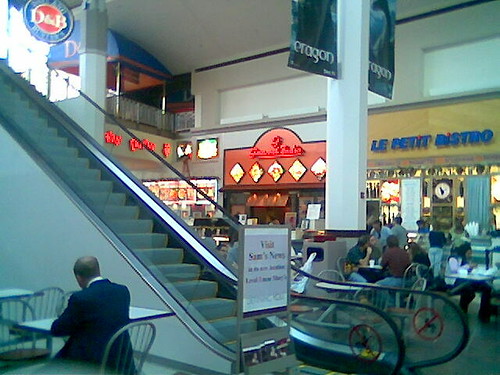 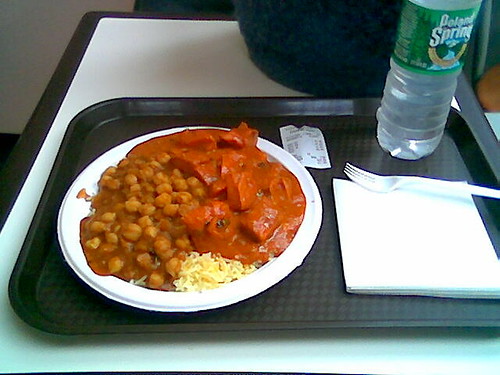 It was actually pretty good.

catherinejulian voted for the food court.

oliviazb voted for Cafe Nordstrum, but I ended up running into them at the Indian concession.)

Right now I am eating a snickerdoodle.

I think it assumes that anything ending in 's' is a collective noun.
On the twelfth day of Christmas,