I dreamt that, in the 50s, Chess Records had tried to cash in on the popularity of Little Richard by recording someone named Little Raymond (who didn't sound very much like LIttle Richard), and that now whoever owned the rights to the recordings had decided to hire Stephen Soderbergh to do a documentary about him to coincide with the release of a Little Raymond boxed set.

OK, time to go back to bed.

After putting together my guitar stuff and hooking up the battery to my car, I stopped by the post office and then headed over to AS220 around noon. It looked like I was going to just be in the way there, so, as I was hungry, I went out to forage for food; most of the vendors weren't set up yet, so I ended up having a muffin to tide me over.

Then back to AS220, where Keith Munslow told me that I'd be doing two songs, the second with Hannah Devine taped to a pole stage left. All right then. I asked Keith if I could play his piano on the second song, and he said sure.

Then I went downstairs to the ready room, where I partook of this delightful assortment of Snickers, M&Ms, roasted peanuts, pretzels, and Twizzlers: 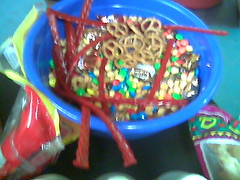 While the bowl was being filled, someone said, "Won't the M&Ms melt and get over everything?", so I reminded them of the M&Ms slogan.

Next, it was showtime. I was the first act:

so I decided to do Photo Album, my song of childhood and Satanism. I was more nervous than I expected, but I think this added a little extra punch to my singing; anyway, it seemed to go over pretty well.

I wasn't going to be on again until towards the end of the show:

so I decided to go through the other room of AS220 (where the bar is) and maybe go into the entrance to catch a few of the other acts. However, while doing this, I ran into

christychristy, who had hoped to catch my performance (d'oh!). So instead I wandered around the outside parts of FOO Fest with her for a little while, getting a cheeseburger at the Crazy Burger stand, examining the anarchist book fair, etc. Then we returned to Empire Revue in time to hear Hannah sing a song, Sarah Reiter describe going to see Motorhead, and Sonny Roelle do solo versions of a few of his band The Sentimental Favorites's songs.

For my second song I did Hybrid Car. It was a little strange sonicly; Keith doesn't have a monitor set up for himself, and while the vocals go through the sound system the keyboard just goes through an amp which is right behind him, so I couldn't hear myself sing very well and the piano was really loud. The rest of the Superchief Trio joined in after the first verse, but honestly I'm not sure how it sounded. But, again, it seemed to go over pretty well, and Keith complimented me on the song afterwards, so that was nice!

After that I decided I wanted to get away from the Foo Fest crowds for a bit, so I went home and took a nap. Then, when I got up, I conceived of a plan: take all my accumulated change to a Coinstar station (it turned out that I had accumulated about $130 in quarters, dimes, nickles, and pennies), then go down to Thayer Street with my guitar and do some busking -- the first time I've done this since I got my permit to do so about a year ago.

I think I had probably played for about 20 minutes before anyone dropped anything in the guitar case (a dollar bill), but things picked up a bit after that. Probably the cutest thing was when a little boy, maybe 10 years old, dropped a quarter in, then ran away, then returned with (I assume) his younger sister a couple of minutes later, at which point he dropped in another quarter and she dropped in a penny. Anyway, after playing for about an hour (and getting about $5.51) I was thinking of wrapping things up when I got a phone call from my sister -- she and her family were returning from spending a couple of days at the beach and were going to be passing through Providence in about twenty minutes, and did I want to get together for dinner? I said sure, so I busked some more until they got there (accumulating a total of $10.51 -- although I think the wind might have blown a dollar away -- but anyway). I then packed up and we went to Antonio's Pizza for dinner, then Ben & Jerry's for dessert. They seem to be doing well; they took Ezra to see his first movie in the theater recently and he did pretty well. (They saw Ratatouille.)

After that, they headed back to Worcester and I went to Nick-a-Nees, where I caught about an hour of Paul Geremia's first set before heading home and going to bed.

I am aware that my music website fails to be particularly usable for most of the things I want people to use it for. The problem is that I'm not sure what the best way to organize 69 (and, with luck, eventually more) recordings is, particularly given my somewhat rudimentary HTML skills. (We will not even talk about my alleged PHP skills, although I may need to bring them to bear on this problem.)

I will continue to think about this when not being distracted by shiny objects, but if anyone has any examples of a website that does this well, I'd be interested in checking it out. I've considered splitting the songs into two pages, one for original material and one for covers, but I don't think that is sufficient, particularly if I continue to record material.

boutell I do know how to create a flash player that allows someone to listen to a group of mp3s in order -- see http://killdevils.com/demo/21Jan2005/index.html for an example -- but I don't think that putting all 69 recordings into one giant playlist is very useful, although it might be marginally better than what I've currently got.)

I think my problem arises from the fact that when I first put together a site I (first of all) thought that anyone who wanted to listen to the songs would probably just subscribe to the podcast and (secondly) I wasn't playing solo shows professionally and had no real desire to ever do so. I don't think the first was ever true and the second has obviously changed.

(Apart from taming the monster of a front page, I also have to put together a page with pictures and probably a short biography.)

I think I'm going to head out to Wickenden Street to do a little postering, after which I think I'll adjourn to a coffee shop to brainstorm. If you'd like to join or distract me (or if you'd like to meet for a drink somewhere), please give me a call.

For quite a while I've been singing 'Leaving Home', which is Charlie Poole's take on the Frankie and Albert theme, and I remembered reading that Frankie and Johnny has been speculated as being based on one or more real-life crimes. I like the idea of writing something based loosely on real life events that did not actually happen to me. But where could I find a story with the appropriate resonances? I thought about it a bit and thought: Snopes. After a lot of clicking around, I came across this story of love betrayed and thought: that could be it.

And there things stood for many months.

But tonight at the coffee shop the logjam broke and I wrote down a set of lyrics. It's all still pretty rough, and it hasn't been set to music yet, but I think it has potential. We will see! (Mind you, in terms of an accurate report of the events in question, it's about as accurate as Frankie and Johnny is.)
Collapse