Every once in a while, when I'm very tired, my brain will try to convince me that I'm in fact already awake and up and doing stuff, so I don't really have to actually get up. It's a silly tactic because it usually only works for half a minute, and even while it's working it's not very satisfactory sleep -- there's always an underlying anxiety that I'm late for work that makes this form of sleep very fitful.

This morning was particularly extreme; I would 'wake up', wander around my apartment a little, realize I was still asleep, 'wake up' again, wander around my apartment, realize I was still asleep, and so on, repeating this process maybe a dozen times. Several times in my sleep I found myself looking at the clock and discovering that I was almost (but not quite) late for work. (I work from home so I can cut things pretty close.) Because of the repetitiousness of all of this, I became increasingly concerned that I had turned off my alarm clock and, if I didn't get my act together, I was really going to seriously be late for work. (Of course now I'm up and it's about an hour and a half before I normally get up. Stupid brain.)

But owing to the number of times my brain put me through this this morning I can now put together a list of some of the things that tell me that this is going on, and also why I'm pretty sure that I'm not still asleep and typing this in a dream.

1. In this kind of situation, I often eventually become aware that my eyes are closed. Sometimes my eyes are closed but I can still see perfectly well; other times my eyes are closed and I can't see but this isn't an obstacle to my getting around my apartment or, in extreme cases, doing things like using my computer. My brain tries to explain this away by saying, "you're really tired and keeping your eyes closed makes things more restful, doesn't it?" but I will not be fooled!

2. There are usually a few vivid images (the clock showing 8:59 is one I particularly remember this morning) but my brain can't really keep it up and so everything tends to be pretty fuzzy, and if I bump into things it doesn't really register, etc. Admittedly when you're really tired there is a certain numbness to your surroundings but this goes well beyond that. I think my brain is trying to conserve its resources and is just throwing the minimum possible stimulation at me so I won't make it wake up. (This may also be a partial explanation for item 1.)

3. I pretty much never make it to my computer, or at most I turn it on and then nothing much happens. My brain is not prepared to simulate email, the world wide web, podcasts, or the other stuff that make up my morning computer routine. This is probably a wise choice, but it's also a dead giveaway.

So, from the fact that my eyes are open, and when I look around everything is pretty detailed, and my computer is on and I've been able to check my email, I deduce that I am, in fact, awake.

I hope this is useful to anyone else out there who is wondering if they're awake.

Edit: And then one of the first things I see is this cartoon and I wonder if my brain is playing some kind of long con on me.

I ordered some stuff from Amazon.ca to be shipped directly to some friends in the US. Here's what the tracking page for the order currently says: 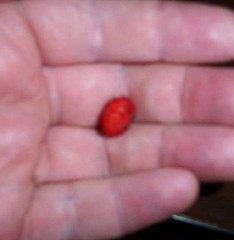 At the beginning of summer, I played music at the City Farm Plant Sale, and to thank me they gave me a mammoth basil plant and an alpine strawberry plant. I've had the strawberry plant long enough that the berries are starting to ripen, so a couple of times a week I get to pick and devour a tiny, flavor-packed strawberry.