although I haven't finished getting all of my stuff out of the car yet.

It was a good vacation -- a pretty big house on the ocean. For a lot of the week it was just me, my mother, my aunt Ann, and her husband Mike -- but Mike was out fishing a lot so really it was just the three of us a lot of the time. (Mom's partner Frank also was there some of the time, and my sister and her family were there a couple of days.) This left lots of reading time, but also time to chat, play cribbage, go into town, etc. ... 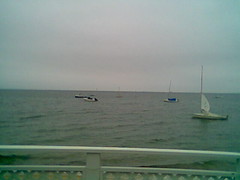 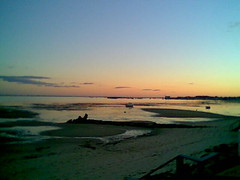 I should have gone swimming but didn't, although I did do variable levels of wading. The house was right up on the water, so when it was high tide the water was literally about ten feet away from the deck. (The beach and sea bed had a very shallow slope, so when the tide was out the water was much farther away -- these two pictures should give you an idea of the difference.)

The house was roomy but seemed to be stocked largely with stuff left by people who had stayed there previously, leading to some odd lacunae. For instance, there were lots of nice plates of all sizes but no normal-sized bowls. There were many cooking utensils, but no measuring cups or measuring spoons. (I brought stuff to make a raspberry pie, including a pie plate and pie server since I thought they might not have those, but didn't think to bring stuff for measuring. The result was not the greatest pie ever, although it was still quite edible.)

The house is rented through tomorrow but I had a show to play in tonight, so after playing games of Cribbage against my mother and my aunt (I won both games) I loaded up the car and headed out to Tiverton, RI, where my show was. I had a hamburger and some blueberry pie, then met

The show was for the Singing Out Against Hunger benefit and was at Evelyn's Drive-In, a clam shack in Tiverton. I was the third act, which I think was good, because by then the crowd had built up some. It's a little weird playing in a restaurant setting -- pretty much everyone is eating, a lot of people are talking to each other, and it can be hard to tell how much attention anyone's paying. But I did my 45 minute set and some people expressed their appreciation afterwards so I think it went OK. (The two songs that got the most reaction, I think, were Sam & The Sham's "Little Red Riding Hood" and Cheryl Wheeler's "Potato".)

Right now I am pretty exhausted, so I guess I will unpack my car and either go to bed, watch a movie and knit, or goof around on the Internet some more. Actually, I suppose I should make that a poll.
Poll #1055571 Predict The Future! Or Possibly The Past, Depending On When You Fill This Out!

Open to: All, detailed results viewable to: All. Participants: 7

The next thing Jake will do after unloading his car is:

Goof around on the Internet.
2(28.6%)
Watch something from Netflix and knit.
4(57.1%)
Go to bed.
1(14.3%)
Something else.
0(0.0%)
Tomorrow (Saturday) I'm playing at the Soutside Community Land Trust Annual Hoedown, and after that I plan to head back to Evelyn's in Tiverton to see Chris Monti play. I'm hoping we will get there early enough that I will see some of the earlier acts -- Chris Rosenquest is on at 6:45 pm, then the intriguingly named 'Barbara the Dancing Spirit Belly Dance' at 7:30, and the Chris Monti Acoustic Band rounds out the night from 8 to 9 -- but we will see. (I would offer rides to people interested in checking it out but unfortunately I think I will be too busy tomorrow to go and get people.)

No plans yet for Sunday, so that may be a day to recover from my week of relaxing.