My alma mater, Brown University, has a campus which has grown a fair amount over the years, and it has a variety of buildings in a variety of styles. The result could be described as a bit of a hodge-podge, but I kind of like the mixture, even though it means that not all of the buildings are very pleasant to look at.

Last weekend I decided to wander around campus and take pictures of the ugliest buildings, and the results can be found below. Historical facts about the buildings were generally taken from the Encyclopedia Brunoniana. 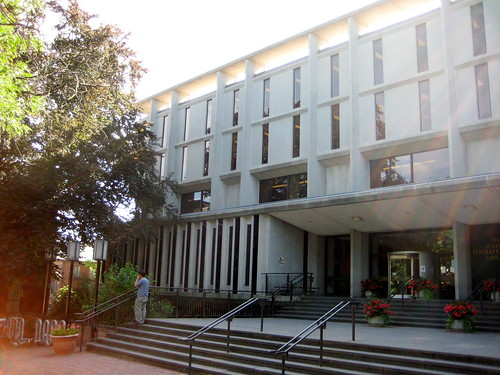 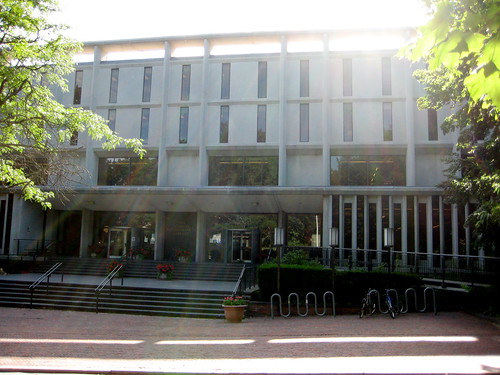 This is generally one of the first buildings that comes to mind when Brown students think of ugly buildings. It was designed by Warner, Burns, Toan, and Lunde. Danforth W. Toan said of it, "In developing the exterior architectural design, we sought to match the modest monumentality of John Hay by developing a series of paired piers on the building perimeter which incorporate air conditioning risers with structural columns. The projection of these piers, along with the variations in the wall plane and fenestration, produce varying horizontal and vertical rhythms intended to reduce the building’s scale and reflect the interior functions. The cantilevering of the main floor, necessitated by the need for greater area, provides a strong horizontal band which hovers above the undulating terrain of College Hill." Since the John Hay library is a marble building in the English Renaissance style, and the John D. Rockefeller, Jr. library is a concrete monstrosity, I cannot agree that the architects were 100% successful in harmonizing with the older building's look. On the other hand, I do appreciate the use of the word 'fenestration'.

This library is generally called 'The Rock'. There is an urban legend that the Rockefeller family got wind of the library's nickname and asked that Brown's administration try to curtail its use, with the result that students took to calling it 'The John' until the Rockefellers realized they would have been better off leaving well enough alone.

One spring I decided to go barefoot all the time and I got away with it for a couple of months or so until I was kicked out of three separate buildings on the same day, at which point I decided it wasn't worth it and started wearing shoes again. I think the Rock was one of the three buildings I was evicted from. 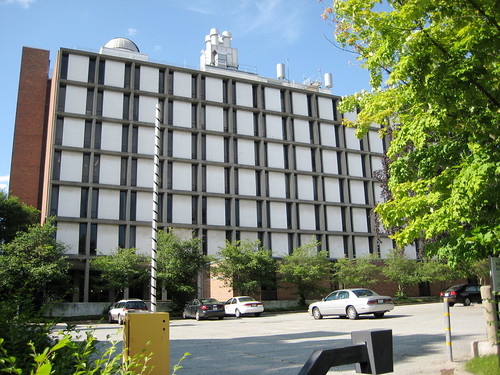 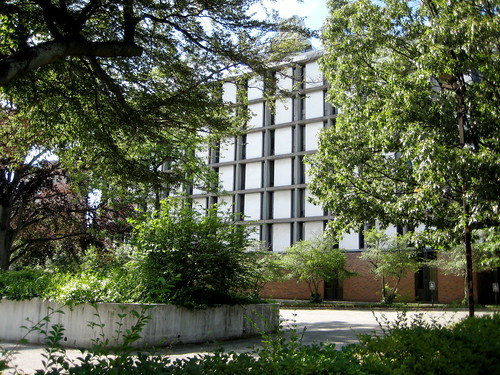 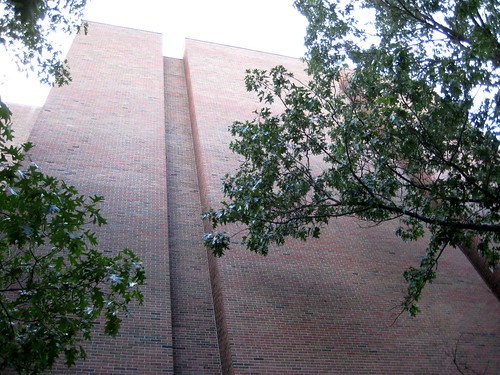 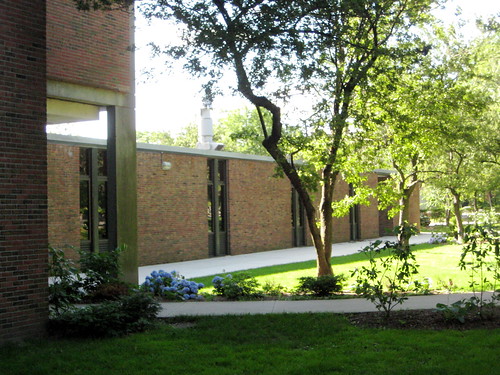 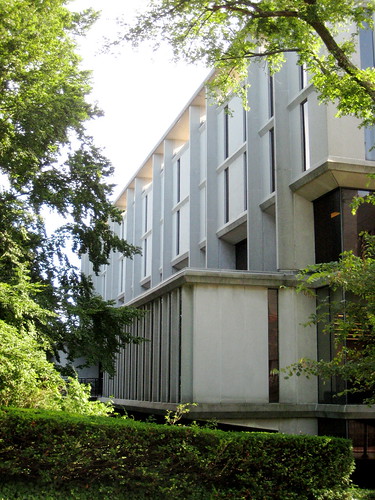 Barus & Holley was designed by Sherwood, Mills and Smith of Stamford. It was originally supposed to face Hope Street, but after East Side residents complained that they thought it would lower property values this was changed and it was instead built at a right angle to Hope Street. It is also largely concealed by trees, which is a good idea, although due to its size (it comntains 300 rooms, including two large lecture halls) occasionally you will get an unexpected glimpse of it looming over a more attractive building, as here: 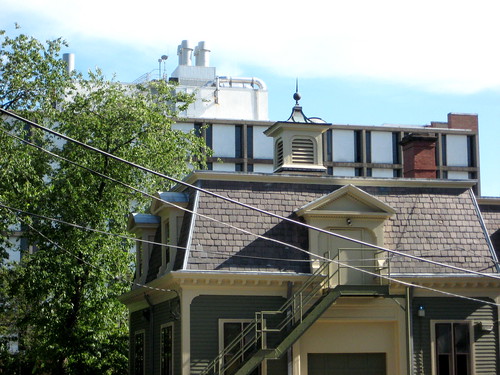 B&H is the home of the engineering department, and a friend of mine (a mechanical engineer) once mooned it. 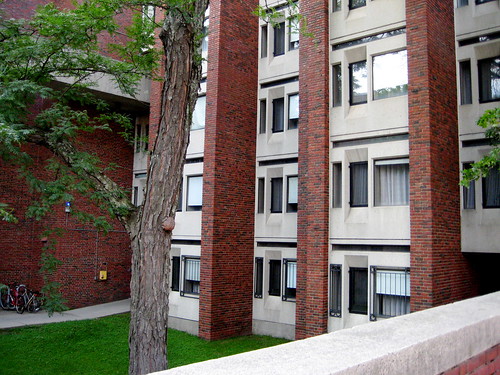 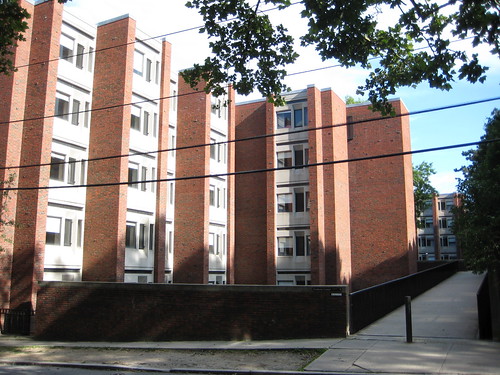 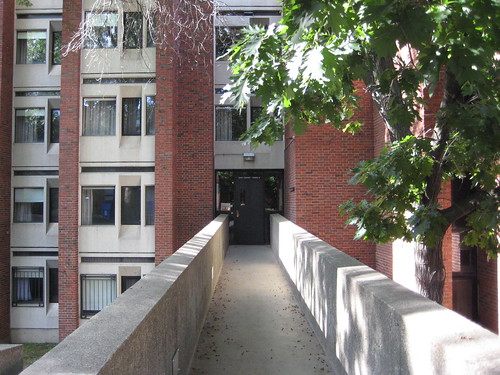 I can only assume that the Grad Center was originally intended to house grad students, but when I went to Brown all the grad students lived off-campus and the Grad Center was largely inhabited by sophomores, along with the occasional miserable junior who had gotten a really bad number in the housing lottery. It has four separate towers (A, B, C, and D) linked by a fifth structure (tower E) which houses a snack bar, some ping pong tables, the Grad Center Bar, and a few other oddments.

My recollection is that the heating is all completely centralized, so that there were some rooms which were cold year-round and others where you had to have the windows open even in the dead of winter to make living in them at all bearable.

The main entrance to the towers was on the third floor, although I also seem to recall that as the Grad Center is on a hill the stories of the different towers didn't always match up the way I expected them to. 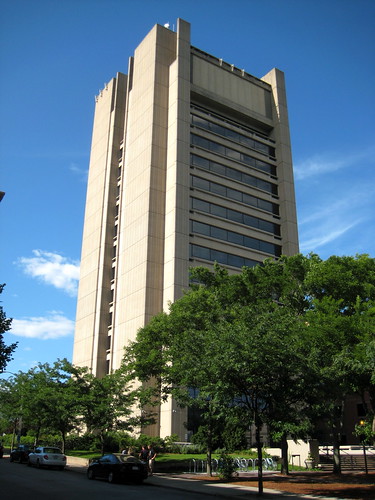 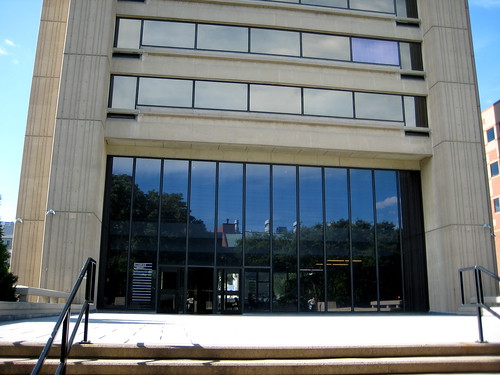 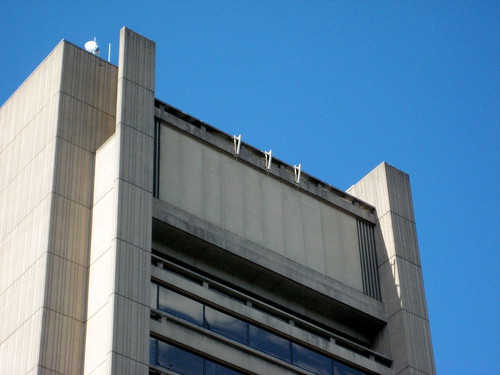 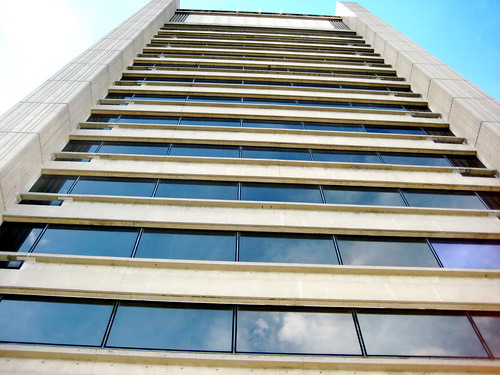 My only entry not from the 60s. (Some would have also included the Center for Information Technology, which is right next to the Sciences Library, but those people are wrong, as I think the CIT is actually kind of neat.)

It was designed by Warner, Burns, Toan and Lunde, who you may recall had also designed the Rock seven years earlier. It's fourteen stories tall, and supposedly Playboy identified the thirteenth floor as a popular place to have sex.

After the CIT was built next to the SciLi there was a big wind tunnel effect between the two buildings, and at one point when the revolving door in the SciLi was replaced with a cheaper, lighter model the wind turned it into a mini turbine, causing the door to revolve faster and faster until it hopped off of its axle and broke into a million pieces. I was attending Brown at the time but unfortunately did not get to witness this.

Since the SciLi is the tallest building in this part of Providence the popular strategy of hiding ugly buildings behind trees doesn't work with it. For instance, here's the view from the main green: 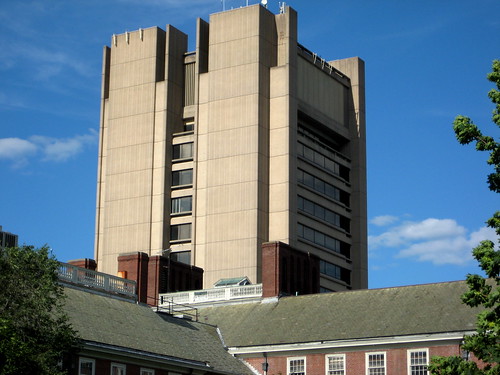 On the upside, one spring members of Brown's Tech House put Christmas lights in all the windows on the south side of the building, hooked them up to a computer, and made it so you could play Tetris on the SciLi.

Open to: All, detailed results viewable to: All. Participants: 21

What is the ugliest building on Brown's campus?